The Sweet Delights of Romance and Fantasy - Manchester Style

Ah! the sweetness of romance and fantasy, especially fantasy, since this is so necessary to the success of any con-artist.  The only asset Alex has not sold is his title and some family Bibles, slowly going to the cats in his less than lavish apartment. 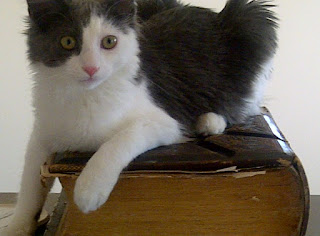 He  has tried to sell both his own title, not yet assumed, and the title of Duchess.

Instead, he uses the title to extract from the credulous all kinds of yummies and goodies.

There is nothing illegal about presenting yourself as the Duke of Manchester, if you, indeed, hold the title.  However, using the fact of the title to evade questions on your ability to pay down hard money for goods, for instance automobiles, and other valuables, is fraud.  The title does not alter this fact.

According to Alex's former wife, Wendy, writing bad checks might not have been Alex's only method for financing his transportation needs, but she cannot recall his every paying off a car before it was repossessed.  Wendy endlessly was forced to take over payments for cars Alex insisted she co-sign for.  In 2003 she bought one in her own name so she knew it would be there in the morning.

So, presenting yourself to the management of the Queen Mary in Long Beach as the Duke and Duchess of Manchester is lawful.  How you use this benefit, however, is subject to judgement by those who associate the title as one of honor.

Dukes and Duchesses are assumed to act in a respectable manner.  While most members of the aristocracy manage to uphold this standard the Montagus have found doing so impossible for generations.

Splendour & Squalor - The Disgrace and Disintegration of Three Aristocratic Dynasties, by Marcus Scriven, outlines the shocking deterioration of these standards in a saga which leaves the reader wondering, "What disgusting act didn't they commit?"  The downfall, for the Montagus, began before the advent of the 20th Century.

Alex's father, Angus, 12th Duke of Manchester, spent time in jail for offenses.  Both he and his father, the 10th Duke share with Alex an utter lack of academic acumen.

But for depravity we turn to Nell, the wife of the 10th Duke of Manchester.  According to the Scriven book, "Nell shared her father-in-law's enthusiasm for illegal gambling clubs," at a dinner party greeted her guests in a mink coat and then, "dumped it and stepped out naked."  Attempts to interest her in the more conventional life usual to English estate holders, which included horses and growing roses, instead found her combining her two strongest interests by converting Balmoral's historic chapel into a bar featuring pornographic art.

These interests were, naturally, expensive and beyond the means of the present duke and duchess.  But Alex and Laura clearly try to uphold the family legacy.

The sadly inadequate photo below presents Alex, Duke of Manchester seated at a piano on the Queen Mary with Laura, Duchess of Manchester, reclining provocatively across the top of the instrument.  The photo, and others of a similar nature, are now down off the Internet.

It was  copied in black and white from the originals, which were full color and published at the website of Justice Howard, Photographer.

They serve to illustrate how Alex leverages his title into goodies to be consumed.  Alex does not play the piano.  Laura reclines, but Wendy, with whom she lived for a while during one of her separations from Alex, said she thought it unlikely Laura could sing.  If Laura had a talent, rest assured, she would have mentioned it.

The photographer, who was reportedly a friend, now likely former friend, of Laura's,  as the photos have been removed, wrote on the site: 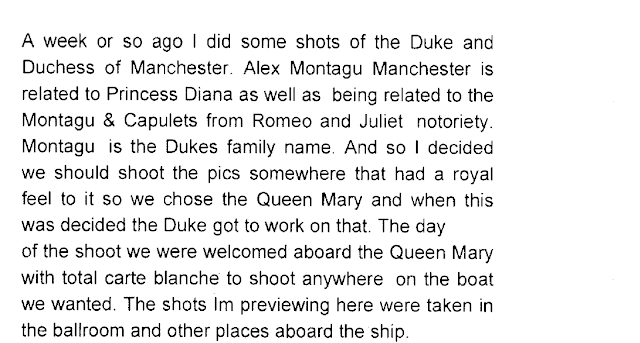 The text above is completely fantasy.   Alex is a very distant cousin to the deceased Princess Diana and the two never met.  Nice crotch shot, Laura! 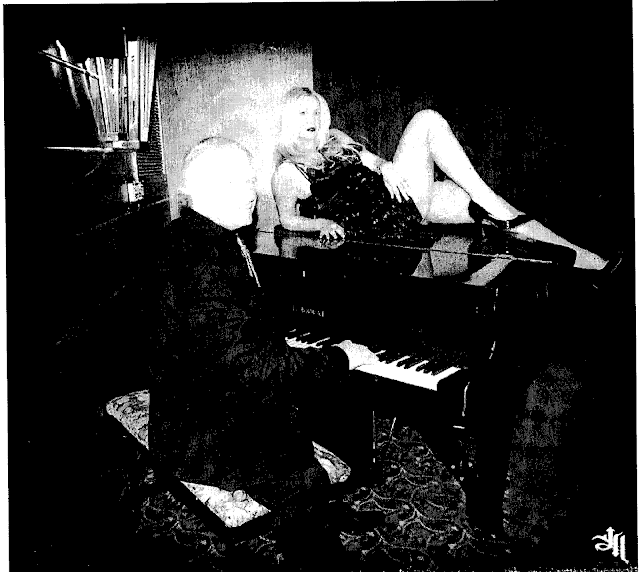 Alex's ancestors include several who served time in jail, including his father, Angus.  But none has done time for crimes such as conspiracy.

And now a word about the Manchester - Franklin - Gell - Conspiracy

As you read the definition below note that the acts of one conspirator are the acts of all.  It must be annoying to some members of the conspiracy that Alex and Laura are so, ah, spontaneous.

An agreement between two or more persons to engage jointly in an unlawful or criminal act, or an act that is innocent in itself but becomes unlawful when done by the combination of actors.


Conspiracy is governed by statute in federal courts and most state courts. Before its Codification in state and federal statutes, the crime of conspiracy was simply an agreement to engage in an unlawful act with the intent to carry out the act. Federal statutes, and many state statutes, now require not only agreement and intent but also the commission of an Overt Act in furtherance of the agreement.

Conspiracy is a crime separate from the criminal act for which it is developed. For example, one who conspires with another to commit Burglary and in fact commits the burglary can be charged with both conspiracy to commit burglary and burglary.

Conspiracy also resembles attempt. However, attempt, like solicitation, can be committed by a single person. On another level, conspiracy requires less than attempt. A conspiracy may exist before a crime is actually attempted, whereas no attempt charge will succeed unless the requisite attempt is made.

The law seeks to punish conspiracy as a substantive crime separate from the intended crime because when two or more persons agree to commit a crime, the potential for criminal activity increases, and as a result, the danger to the public increases. Therefore, the very act of an agreement with criminal intent (along with an overt act, where required) is considered sufficiently dangerous to warrant charging conspiracy as an offense separate from the intended crime.

So, Alex and Laura, keep the drivel and attempts to break into my facebook account coming.  There will be an accounting, rest assured.
Posted by Melinda Pillsbury-Foster at 2:59 PM