CORRECTION OF ALEX - Swertlow article from 1988

Laura and Alex were very naughty.  They will get gift certificates to a Alzheimer's Support Group in their Christmas stockings.  They tried to change the date on the article below, the date seen handwritten in the copy on Laura's website.

Of course, it is very unlikely it was really a loss of memory so we need to think about those stockings again, perhaps.

It could not be right.  In 1985 Alex was firmly enmeshed in the disaster which is his life, and also standing trial, in Australia.  So I spent several minutes, 10, to be exact, making a call to the writer.

Frank Swertlow, who promptly answered the phone, wrote the article.  He reported to me he did not initially believe Alex was who he claimed to be. He checked and discovered he was, indeed in the peerage. But also remembered many things did not ring true, along with fascinating insights on Alex, for instance his being pudgy.


Also, the article was not from the Los Angeles Times but from the Daily News where Frank Swertlow's columns appeared. This article was written, and published, the same year as the fundraiser where Alex did not meet Michael Jackson, 1988.  Alex was present at the Jackson estate as the guest of Lia Belli.  Swertlow was at the event and added recollections of Lia Belli and the interesting relationship between her and Alex.  He recalled she seemed to believe Alex was wealthy.  This raises the question of where any money Alex had would have come from.

Sources indicate Alex failed to pay back considerable amounts of money ordered by the court in Australia, according to August 14, 1985 article appearing in The Sun, an Australian paper reporting on Montagu's conviction for 22 felony counts which involved over $100,000 in stolen money, which could well account for his ability to relocate to other parts of the world, including San Francisco and Beverly Hills, and his ability to pull of the con in Beverly Hills.

Alex and Laura, please note the article places Alex's age at 25, making the year, of necessity, 1988.  Alex turned 26 in December on his birthday.

Clearly, any such ill-gotten gains had been exhausted by 1992, when Alex moved his couch -surfing from Richard's place to encroach on Wendy.

It had, of course, been many years since Frank had been asked about the article, but evidently Alex made an impression on the reporter, who, when we spoke, immediately recalled, “Lord Limo,” among other fascinating insights from his career with the Daily News and later with People Magazine, and, of course, about Alex.

Every time Alex or Laura get lathered up enough to hit the keys more material, and sources, are created, a wonderful thing!   The book proposal is now wending its way toward a publisher in the UK, thanks to a friend in publishing over there.

The full story will be told - and sold!

Back, for a moment, to Laura's newest online efforts.  The date on the original was doctored.  Wendy says the writing looks like Alex's.

The other blather up on the 'Duchess' site is pathetic.  Soon I expect they will be putting up material on Homo Erectus and pointing out this, too, is part of the Manchester lineage.  Ancestors - we all, of necessity, have them.  But some ancestors are not famous for their profligate behavior and we, as descendants, do not expect to keep eating seed corn long since consumed.

Do psychopaths have a club? If so, who is trusted with doing the accounting?  A real conundrum. 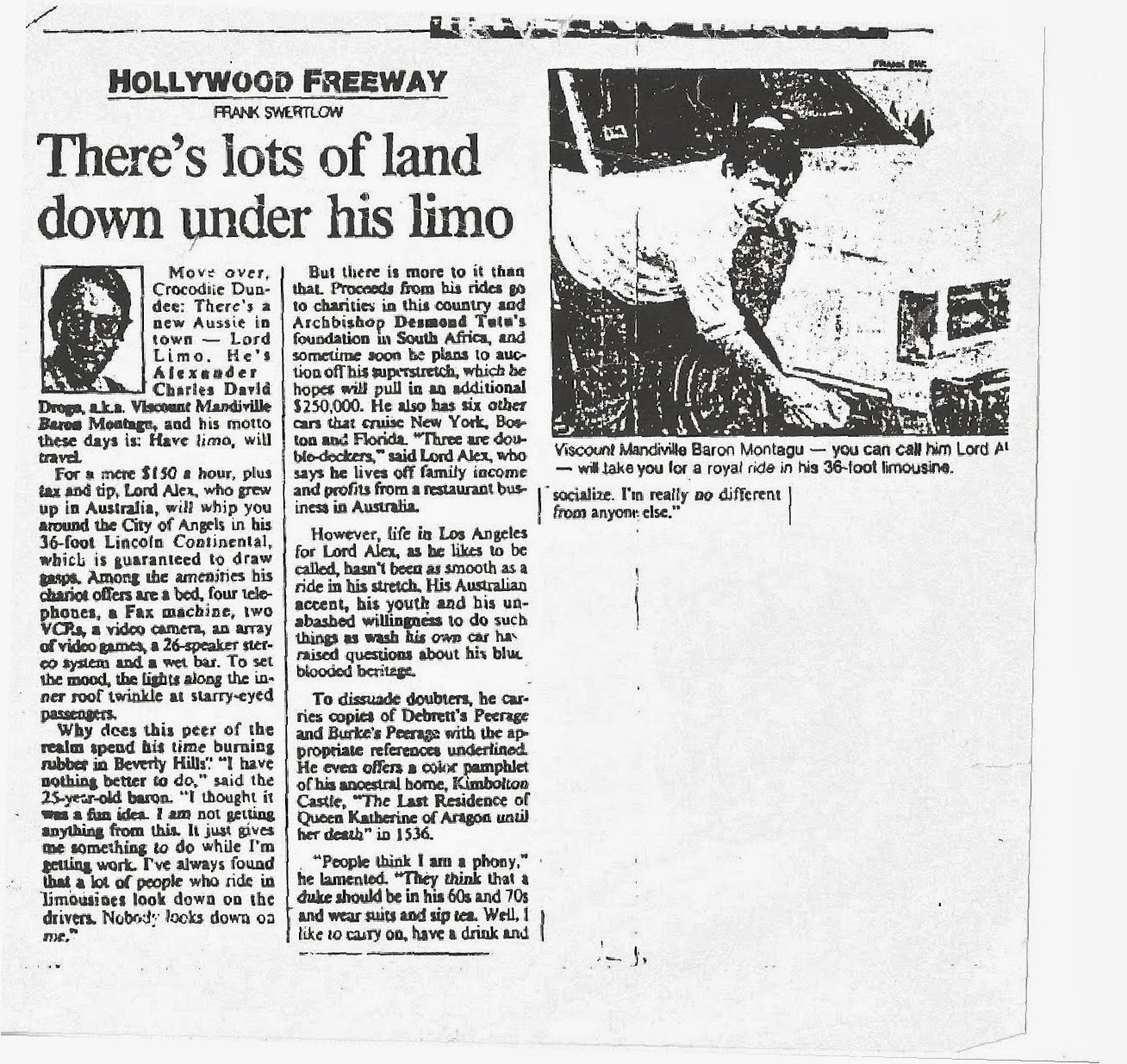 Posted by Melinda Pillsbury-Foster at 7:07 PM