"ELIZABETH TAYLOR, THE DUKE OF MANCHESTER, MICHAEL JACKSON MANY WONDERFUL LETTERS ABOUT MANY THINGS INCLUDING, THE WORLD'S PRINCESS, PRINCESS DIANA."

What a clever comment, don't you think?  Read this article about Alex's relationship with Michael Jackson.  Michael Jackson - Stalked by a Psychopath

Liz Taylor was a close friend of Michael's.  How would she have viewed Alex if she had known what he tried to do to someone she really cared about? 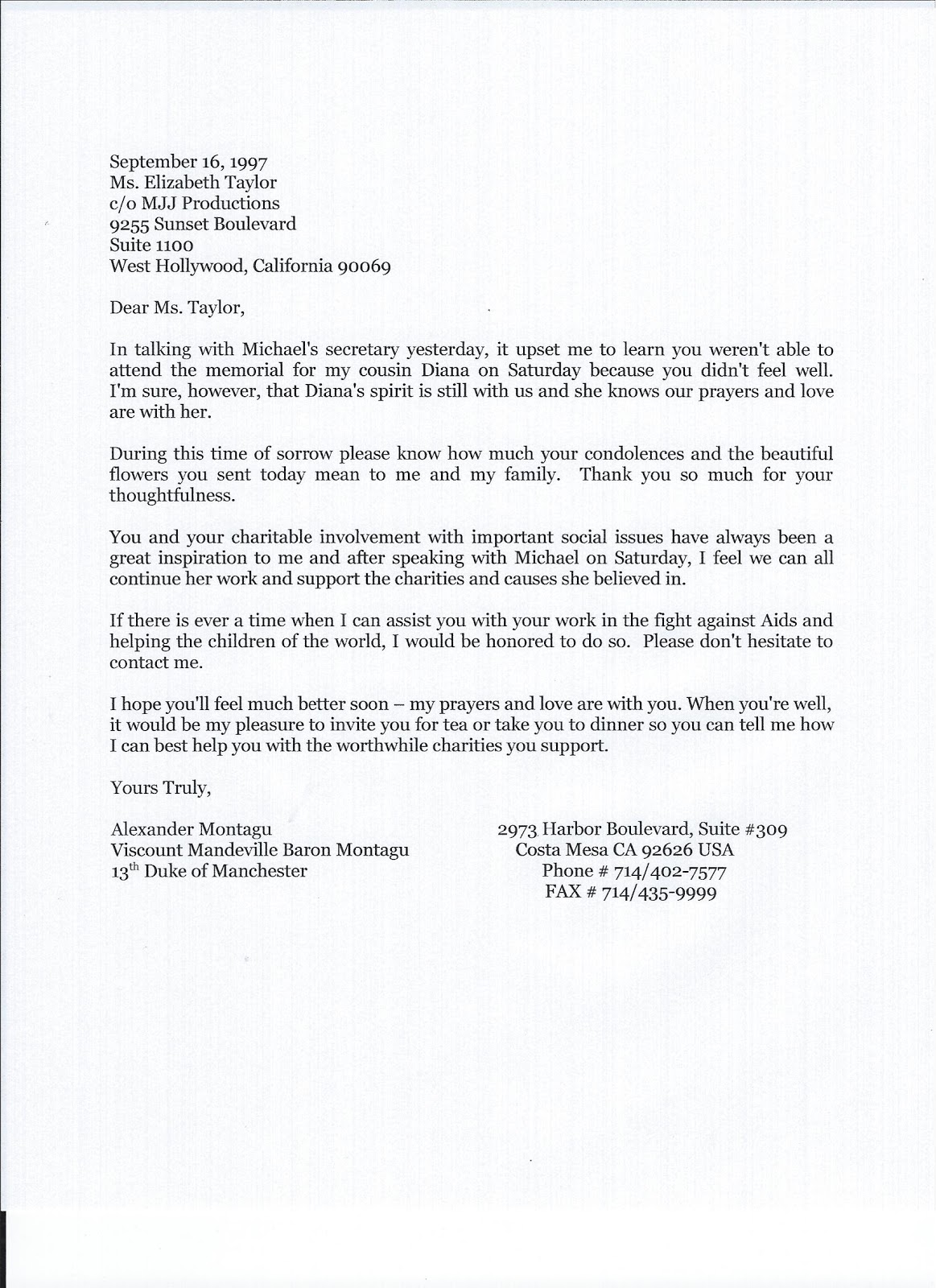 This past weekend Wendy, former wife of Alex, 13th Duke of Manchester and the mother of his two children, went out to the garage to burrow through the records and papers still in her possession, from her 15 years of life supporting Alex in the life to which he was determined to be accustomed.

Forth from the stacks, came several letters which Wendy wrote for Alex.   The letter above was authored by Wendy, anxious Alex not be embarrassed.

As so exhaustively illustrated on the pages of this site, Alex is barely literate. Punctuation, spelling and other aspects of correct use of the King's English is much beyond him. This disability was not unknown to Alex, who had all too often experienced the kind of reaction seen on the pages of Huffington Post last January when he launched his missives into the world without copious editing and rewriting.

“Watch the time...I's almost time to go to bed so you can get up for school in the morning. Make sure your homework is done......”
Share it
Permalink

“ok, then write to David Icke. nobody can help you here.”
Share it
Permalink

“Now look here, Alex ..... you've got to stop toking. Your delusions of grandeur may be amusing, but your spelling is positively atrocious. ( I suspect the Duke's langwitch isn't Englitsch )”
Share it
Permalink

“i think i met you on a greyhound bus when i was 16, you still sound insane”
Share it
Permalink

“For a Duke your knowledge and spelling of the English language is atrocious. You appear to be somewhat mentally challenged and would be doing the rest of us a favor by departing.”
Share it
Permalink

“Apparently dukes don't get the education these days that they once did.”
Share it
Permalink

“And you should learn to spell. It's easier to read nonsense when proper grammar and punctuatio­n is used.”
Share it
Permalink

“This is not a Joke my name is Alexander Montagu the 13th Duke of Manchester I have been accused of bigamies and it is all a lie I have documented proof that my trust and lawyers and mother has set me up for something I have never done all because of greed the Royal family has a lot of power and will do whatever they can to cover up any sort of embarrassm­ent even if the victim is 100% in the write and has the legal documentat­ion to prove this you should look up the duchess of Manchester under goggle and you will see a small amount of may of the documentat­ion to see how the royal family does whatever they can do to cover any thing they can stop. Look investigat­e I can also let people know may be people should look into the cameras around Sandringha­m around the Queens property the media are the worst crooks in the world especially when the British media is known world wide to be the worst my mother worked as a right arm for Murdoc in bed and in work so I know

“In 1984, Alexander Montagu was convicted by a court in Melbourne of assault with a speargun. In 1985 he was sentenced to three years imprisonme­nt in Australia for fraud, however he was released the following year. He was deported from Canada for entering the country illegally. In 1991, Viscount Mandeville offered to sell his title,[whi­ch?] despite having no peerage title then and it not being possible to sell a hereditary peerage.”
Share it
Permalink

“Great command of the language and spelling abilities. Is this the result of all those Royal marriages?”

Those following this story may be aware Laura persuaded HuffPost to remove the embarrassment after an article appeared on the slander Manchester had directed toward the Royal Family.

Alex has a vested interest, I'm sure Laura pointed this out to him, not to antagonize the Royals since, as we have seen, he claims to be one, sort of.

Naturally, Alex attacked Melinda, who he was being paid to stalk and slander anyway, claiming she wrote the post. But this is all misdirection of the kind used by John Fund and Karl Rove to keep you from looking at the real issue related to Electoral fraud by e-voting and machine and instead focus on the idea significant numbers of individuals will go to the trouble of voting multiple times.

But even more at issue was the public exposure of the Ducal illiteracy.

When Alex was still married to a woman who was literate creating the appearance of literacy was not a problem. So from 1992 – until 2007, when Alex knew he was about to horribly expose his lack of education, he would turn to Wendy and she would oblige him, cleaning up the garble and turning it into something, well, human.

The letter above, to Elizabeth Taylor, was authored by Wendy Montagu in 1997 as a thank you for flowers, sent to the memorial service she was unable to attend, for Diana, Princess of Wales.  Wendy, who has a clear memory of the events surrounding its writing, and would like to make some points which might otherwise be missed.

Clearly, the writer does not claim have a life-long relationship with Liz Taylor as claimed in later years. Alex, in fact,  never met Liz.

The referenced gift of flowers for the memorial service and this letter were their only contact.

But time moves on, people die, and cannot, therefore, correct the record.

If you read the materials produced for the sale of the Michael Jackson videos you see Alex claiming to have known Liz since he was a child. He, in fact, told Melinda he lived down the street from her and close to Elvis Presley, who gave him rides home from school.

At the time the letter was written to Liz, Alex was eking out a very marginal living, dependent on his wife's income as a receptionist.

Makes you wonder what he had in mind, doesn't it?
Posted by Melinda Pillsbury-Foster at 8:00 PM