A Call from Laura - Who paid for the Ritz- Carleton? Craig Franklin?


Today Laura, the Duchess of Manchester, placed a phone call to the Duke's 13 year old daughter.  The girl informed Laura she did not want to talk to her.  The girl asked to talk to her father.  This resulted in a barrage of filthy language.

Neither the Duke or his present wife has seen the girl since she was nine years old, in January, 2009.  Distraught, the girl called her mother, the former wife of Alexander, 13th Duke of Manchester, at her work.

Although the Duke has never paid court-ordered support for his two children, according to Laura, they have enough money to spend time at the Ritz-Carleton, Laura's favorite hotel, and vacation on the island of Catalina, when they like.

Informed of the call, Wendy, the former wife of Manchester, tried to calm her daughter.

After they hung up, Laura called the girl back.  The girl remembered Laura saying, for publication, "She was acting like nothing had happened.  I asked if my father was in the room."   Immediately Laura handed the phone to him and he spoke to me."  I said, "Are you aware of how your wife has been talking to me?"  Dad said, "no, what?"

The call was disconnected immediately.  The call would probably not have been answered if Laura had been calling from the phone number which she is proud of having had for over 20 years.  But a call placed to that number afterward ascertained it had been disconnected, quite possibly because of non-payment of the bill.  The announcement said, "This is no longer a working number."

Laura might be worried about Alex's pre-trial hearing for passing a bad check.  Or they could be feeling  the pinch because the Manchester Trust recently cut their monthly stipend.

The girl wants no further contact with her father or his wife.

Wendy and her daughter are worried Alex and Laura are trying to abduct the girl so they can try to get control of the stipend paid for her support by the Trusts. Wendy said, "everyone knows they only want her for her allowance.  I've stopped their ability to contact her on the advice of CPS."

The girl concluded.  "There has been no birthday card, no Christmas card, nothing but lies and abuse, over and over again, for years.  Their voice mail messages are disgusting.  No, I don't want to see them.  I'm finished."

UPDATE:  In response to our recent query, no, the background in this photo is not the apartment of John Fund.  While the Montagus live in squalor (nod to the book written by Marcus Scriven, Splendor and Squalor - The Disgrace and Disintegration of Three Aristocratic Dynasties), not even they have ever subsisted in an apartment filled to the ankles with a morass of papers and garbage and forgotten they possessed a rug.  Also, the Montagus have two cats who would certainly have made sure their bed was not littered with rat feces, which was the case with Fund's apartment in 2001.   Also, since the Montagu's are evicted so often there is not time for the refuse to build up to any appreciable degree.  Additionally, the Manchesters  don't read and are barely literate.  Therefore they don't bring home magazines, papers, and printouts from work (having no jobs), which is the case with John Fund.  John, as you probably know, is no longer with the WSJ having moved on the American Spectator.

The background in the image below was sent to me by Alex after he kicked Laura out, about a year ago.   The face is definitely Laura. 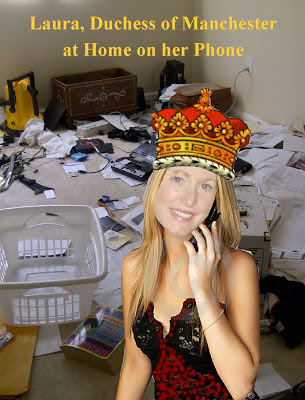 Posted by Melinda Pillsbury-Foster at 8:08 PM