The Story of the American Girl Doll 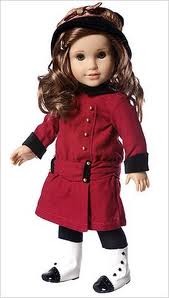 Ashley, then around eight in early 2009, had expressed a wish for an America Girl Doll. Wendy was disinclined to buy it as it exceeded their slim budget. It is expensive to house, feed, clothe, and care for two children. When parents are faced with decisions of this kind they often decide to wait and see if the wish endures for a time before spending money. This was Wendy's position in June, 2009 when Alex and Laura did something which impacted both Wendy and the two children of her marriage with Alex.


In May of 2009 Ashley still loved and trusted her Daddy, as little girls do. Alex Jr., several years older, was less trusting of his father. He had seen more.


On May 5th Alexander called to inform Wendy they were never married. Therefore, their children were both illegitimate and the Manchester Trust would discontinue the support payments being made to make up for those he was failing to make himself. On June 5th the Manchester Trust verified this as true.


Alex knew he was still married to another woman, Marion Stoner Montagu when he and Wendy took out the license in Orange County, California and were married.  He lied on the application.   Marriage Certificate


Alex had known he needed to get a divorce in 1984 when Marion left him, filing for a permanent separation and publishing the fact she was not responsible for his debts. The Stoner Story  This link leads to all the legal paperwork and a transcript.


Alex had known this when he offered to sell the title of Duchess of Manchester in 1988 in a newspaper article. This article in The People includes these quotes.    MyBarmy Marriage - I Left When He Fired At Me With a Speargun  by Ian Dougall. He also knew he could not sell a title which was not yet his because his father had, inconveniently, not died quite yet and would not do so until 2002. In the article Marion pointed this out to him.


Alex knew he was still married when he persuaded Wendy to go through the ceremony of marriage in 1993. He needed her to be his wife in the eyes of the Immigration and Naturalization Service because of threats from one of his former partners, Rene, whose couch he had been occupying until he moved in with Wendy.


Alex knew he was still married when his mother insisted he get the divorce taken care of in August 1996. He was also to then remarry Wendy so the matter would be put to rest. And while he signed the papers, he never informed Wendy they were not legally married.


August
9 - Papers are filed for Montagu v. Stoner divorce
Application for Non-Payment of Filing Fees
September
27 -Alex, at the insistence of his mother, Lady Mary Montagu, agrees to cooperation in a  divorce from his first wife, Marion Stoner Montagu. He has been bigamously married to Wendy Buford Montagu for over three years.  Although ordered to do so by his mother Alex does not repair matters and remarry Wendy.
Record of Proceeding/Outcome Sheet


Ashley was born in 1999. Alex knew he was allowing his daughter to be born illegitimately. He said nothing.


Alex knew in November, 2006, when he took out divorce papers and put Wendy through the process of divorce, forcing her to retain counsel and stealing everything she owned. If he told her he could not, after all, have demanded he be paid alimony and child support.


In September of 2008 Alex again lost in court. He had no physical custody, having lost this the year before. He was ordered to pay both alimony and support for the kids. Advised by the court not to remarry during the hearing in 2007, a month later he married Laura. Reporter's Transcript of Judge's Ruling

Alex never paid the ordered support, or any of the other expenses he had caused which the court had ordered him to pay. These were, instead, borne by Wendy.


Support was, instead, made by the Manchester Trust directly to Wendy for the support of the children from 2007 on. These were not huge payments, simply making up some part of what had been ordered by the court in Orange County.


Alex knew exactly what he had done when he called Wendy to inform her their children were illegitimate. He had taken steps to ensure she received no support for them whatsoever.

Then, Laura sent a present to Ashley. This was the American Girl Doll, which Ashley just loved and for which she thanked them fervently and frequently. Because of what Alex had done it would be hard for Wendy to give presents to the kids until July of 2011 when the law suit instituted by the Manchester Trust was litigated and it was determined by the Chancery Court in the UK this did not violate the terms of the Trust.


Alex and Laura called continually after the doll was received to harangue the little girl, telling her she was ungrateful. Ashley, upset, finally told them she had been grateful. The doll faded from her life, no longer taken out to be loved. Now, you know the story of the American Girl Doll which was, briefly, a part of Ashley's life, and one which she will, doubtless, remember.


Posted by Melinda Pillsbury-Foster at 10:35 AM