Note this interesting mention of Alex in the article below:

"Her son, the Honorable Alexander Charles David Drogo Montagu, was taken to Prahram police station for questioning after an incident at the home.
Montagu, 19, is the heir apparent to the Duke of Manchester.
Police were called to the Montagu home after a complaint by Melbourne private
detective, Norm Mathews. Matthews was at the home to serve the two writs and
inspect the premises for the owners.
Prahram police confirmed they seized a loaded 22 rifle found in Montagu's bedroom.
They said they released him after questioning.
Alexander Montagu, a former Geelong Grammar School student, denied all knowledge
of the incident.  He said he was working as "bar manager" at Lazar's restaurant in Melbourne at the time of the incident.
Montagu also denied he had been taken to Prahram police station." 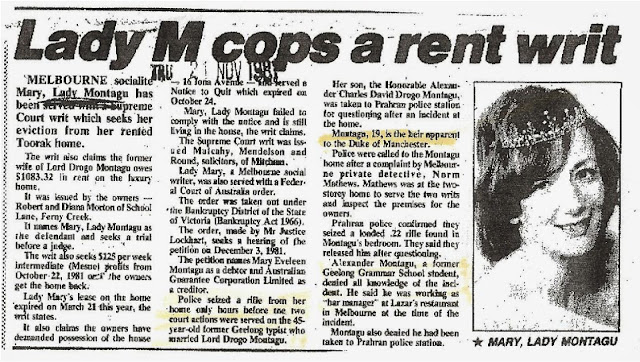 Posted by Melinda Pillsbury-Foster at 3:27 PM